Regardless of who you see and which news programs you watch, on-screen journalists may seem effortlessly prepared. In reality, however, TV broadcasting – especially TV news production – is no easy task.
By vooyagers
27/07/2019

When you turn on the TV to watch the news, what do you see? An articulate news anchor reporting on the recent political event? A battered reporter shouting among the rowdy fans of a match between two rival football clubs? Or a glamorously dressed host gushing about the latest celebrity breakups and scandals? Regardless of who you see and which news programs you watch, these on-screen journalists may seem effortlessly prepared. In reality, however, TV broadcasting – especially TV news production – is no easy task.

During the Art & Music Experiential Study Tour to Melbourne, BINUS Serpong students had the chance to conquer the exact challenging experience of TV news program production. The making of a TV news program requires diverse groups of people, and so, the students had to assume specific roles to ensure that every single step of the program goes smoothly. While these groups of people may differ in size and structure depending on the TV networks and programs, they can typically be divided into three production phases: pre-production, production, and post-production.

This is where it all begins. Aside from the periodic breaking news, news programs are usually scheduled. Therefore, everything that happens before the actual shooting is pre-planned. Newsworthy materials are often gathered beforehand, so students had to prepare what to air first before actually shooting the program. As students were assigned absurdly bizarre news such as “It’s Raining Money in Melbourne!”, “Zombie Shark Virus” and “Interview with an Alien on the Moon”, they would have to be as creative as possible in producing a journalistic masterpiece. The graphic and visual effects team will have to work twice as hard, too, to create the fictional environment. Sounds like an impossible feat? Absolutely not! At the Australian Center for the Moving Image, you would have the chance to experience the thrill of experimenting with a green screen! Of course, students could not resist inserting modern Melbourne background, apocalyptic looking landscape, and the Moon for the live report later. 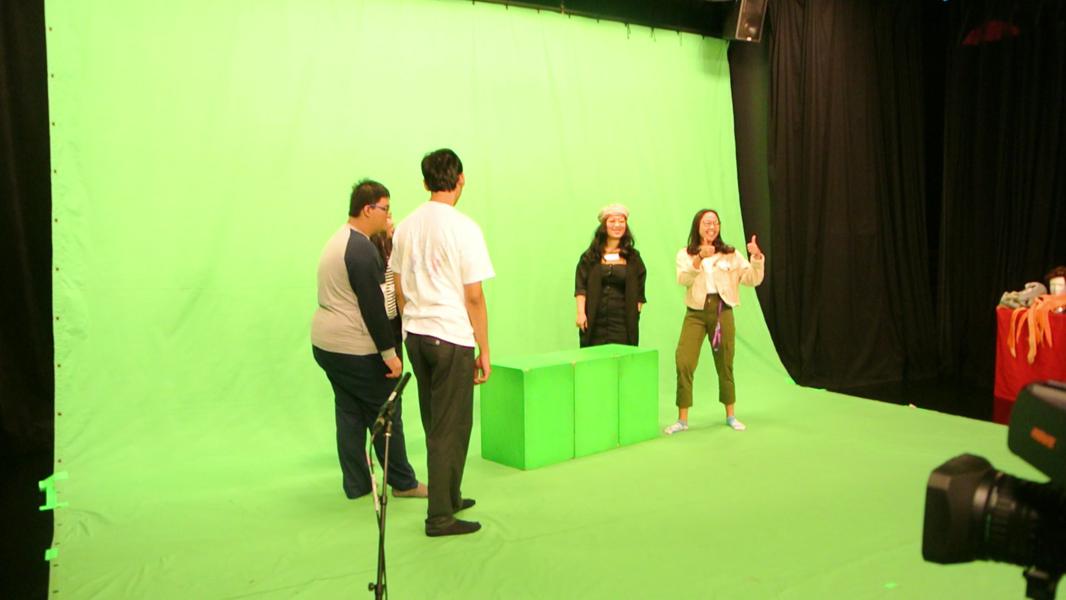 Students preparing the set for the shooting

While the writers and editors write and review the events being covered, the reporters have to prepare interview questions. Meanwhile, the wardrobe and make-up team make sure the news anchors will be camera-ready. News anchors and reporters were made to look presentable for the camera, while the staged interviewees were dressed up accordingly. This is when the wardrobe team’s hard work comes into play. Students acting as interviewees were dressed up in scientist clothing, along with shark and alien costumes. This is so each character would look convincing for the live interview on-screen. After everything is in place, camera persons, audio and lighting technicians, as well as directors and producers are standby for when the program is on air. And now, it’s show time! 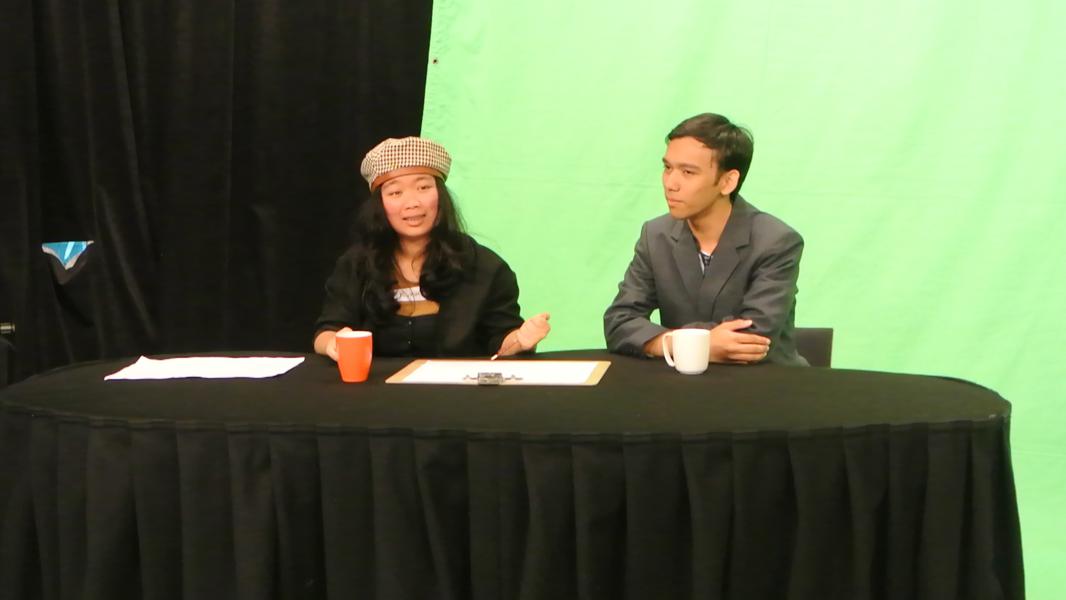 Camera, rolling, action! When you have so many fascinating stories to tell, of course you have to broadcast it to the world. Glammed up news anchors will be leading the news from the studio, while reporters and camera persons will be waiting for studio cues to report live from the site. By this time, camera persons along with audio and lighting technicians are all frantically working from their respective posts. 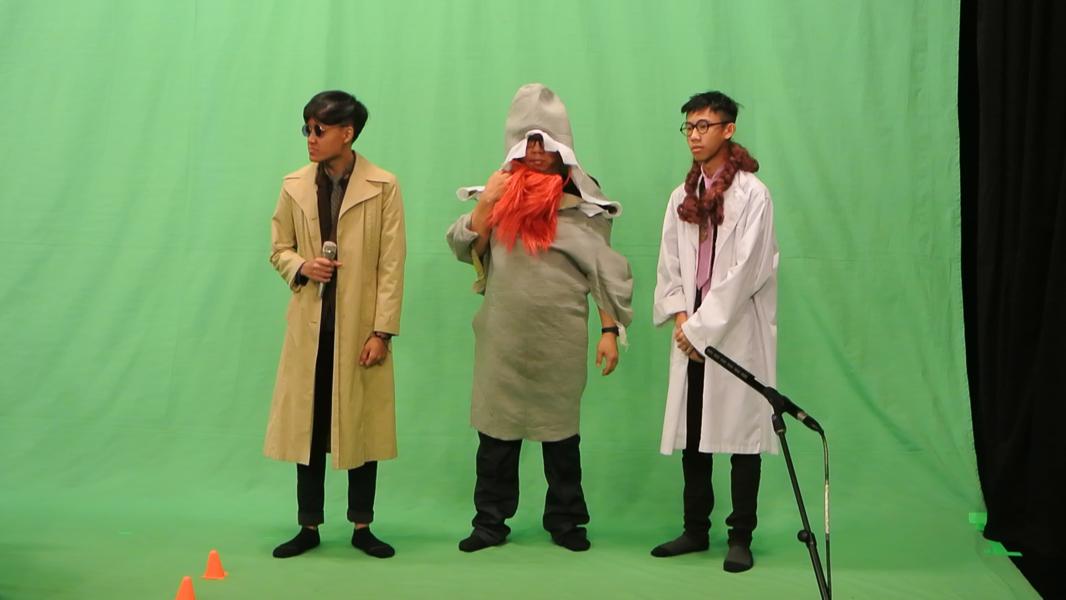 A comprehensive and valid news coverage would require news anchors and reporters to interview experts or witnesses. With the case of a viral hybrid infection and extraterrestrial phenomenon, of course students who were (literally) acting as the reporters had to find willing interviewees to back up the events they were covering. Both news anchors and on-site reporters also had to struggle to maintain their poker face and be patient, too, especially when interviewees are hard to cooperate with. But who can blame them? They were interviewing zombies and aliens!

And cut! Last and definitely not least, post-production happens when the camera stops rolling. At this point, the video and sound editing teams have to pour their heart and soul into stitching all the raw footage and audio into one single program. After editing is done and the final product is approved, the program will be ready to air! 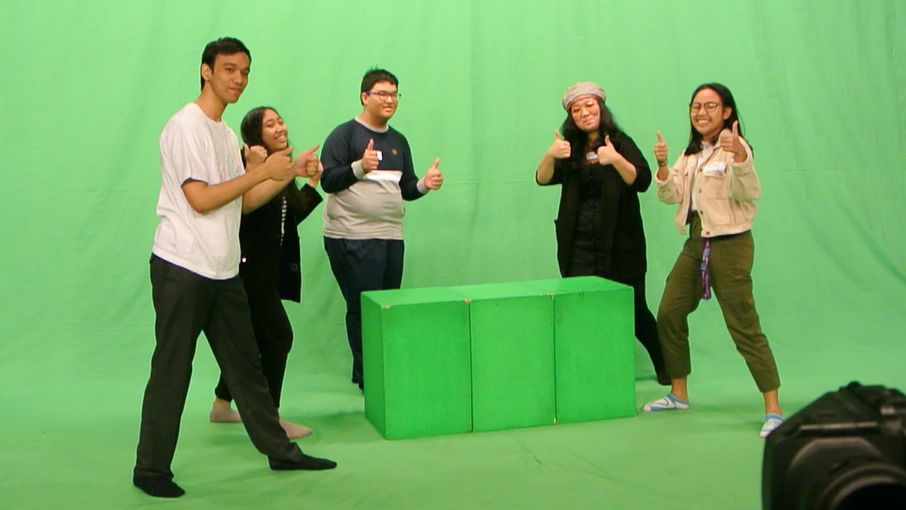 That must be all for TV news production then? Yes, but every day is a new day and tomorrow, it’s these three production phases all over again. There may even be overlaps, as production happens daily, and so pre and post production may stretch for days. Sure, broadcast journalism can be demanding, especially when dealing with significant news that can potentially change the world, but make no mistake. TV news broadcasting relies on news, and news reports on life. Life is unpredictable, and so working in TV is always going to be full of surprises. If you love challenges and believe in changing the world through journalism, this path is definitely for you!